So today was the kick-off at Block 1912 for 40 Below: Edmonton's Winter Anthology. Jason Lee Norman, perceptive editor that he is, chose two of my submissions--a poem called "Cold Comforts," and a prose piece, "Moon Calling," that began life way up this blog site, but had to be cut out once selected.

It was interesting meeting several of the other contributors and hearing them read. I did not read at the venue, but was on CKUA ARTBEAT this afternoon, reading both pieces.

Richard Van Camp, when he was Writer-in-Residence at the U. of Alberta Department of English and Film Studies told me some two years ago that I seemed to write a lot about the cold, and should try to get some of it published, so there it is. Richard celebrates the full moon every month, calling out "Happy Full Moon" to anyone in earshot (and given Richard's skill at projecting, that can be quite a distance).

It turns out I also write a fair bit about the moon. And snap a lot of pictures of it with my cell phone camera. 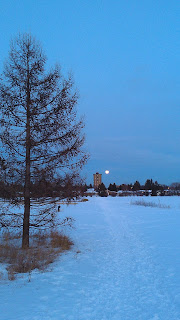 Two months ago, Anna Marie Sewell and I took a group from the Edmonton Poetry Festival through the North Saskatchewan River valley at Louise McKinney Park at the full moon, to see what the experience might inspire. We arranged to have everybody out on the Capilano Footbridge just as the moon came up right in the heart of the river, downstream. At first is was just a hint of something going on behind a screen of evergreen  trees. Then a faintly orange crescent began to assert itself, and after fifteen or twenty silent minutes, there is was, shining full, and changing to ever brighter silver as it got higher above the horizon.

Several of the seventeen participants mentioned that it was the first time they had just stood and watched the moon rise, and were amazed because they swore they could actually see it move--and I agree: with patience and rapt attention to its relationship with the foreground, the moon was in slow, deliberate, practiced motion.

Eventually we made our way to a building with some lights on its outside stairs, and people began to write up their impressions. Four later submitted drafts to the Edmonton Poetry Festival Facebook site.

My contribution was this:


Harvest Moon we call this glow, this ripened
moon of gathering that guides our steps,
encourages our taking in,
through eye, ear, nose, tongue, and skin;
yet tonight even as she comes to
full bright perfection, joins us, together
points our ways along
moon-shadowed paths,
because the moon is made for changing,
ever cycling, waxing, waning,
eternal analogue reminder of
continuity in our
on-again,
off-again
digital
times,
she styles
herself as well
a Moon of Letting Go,
shifts, begins to perfect
her darker, shaded other faces.

Here we gather, give and take
illumination,
collect ourselves, reflect upon,
then moon and we
continue on.

But I think the Perkins who really got the moon was our son David, when he was two-and-a-bit. I used to take him for a ride in his stroller winter evenings after supper, while Eva went to work, four evenings a week at the ESL program at Alberta Vocational College (now Norquest). He would sit all bundled in his snowsuit, holding a flashlight. One night, as we went north towards a strip mall where he could look at the toys on display at a large drugstore, and take his time explaining them to me and discussing their merits as potential Christmas presents, he did not need the flashlight. There was a full moon reflecting off new powder snow--not deep, just enough to freshen the surface to bright sparkling white. He looked up to his right and said. "Daddy. The moon."
"Yes," I agreed. "The moon. A full moon."
"But Daddy, the moon."
"Yes, the moon."
"But Daddy. The moon. It's following us."
And he was right. There it was, coming with us to the store.
And there it was again, later, to our left, following us home.
And if I and we pay attention, it follows us faithfully, every month we let it.
And every month we do not.

Don Perkins
I started this blog to get me back in the habit of committing something to writing on a regular basis, and to give me a space in which to work out in writing what it is I'm thinking about. Not exactly original objectives, I know, but mine own for now. After all, I teach creative non-fiction writing courses, among other things; time to get cracking at what it is I try to teach my students--process, process, process. Get it down, don't think it up (with apologies to Julia Cameron whose The Right to Write, as I recall, reminded me of this essential bit of writerly geography).